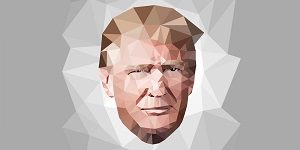 The Trump ‘reflation’ trade that had propelled stock markets to new highs post November ’16 looks now to have lost its lustre. The President was elected on a clear message. He was a man who could get things done. He had real world experience.  Government was easy.

Less than 3 months since his inauguration, the Trump effect looks to be running out of steam. On the plus side, the president’s supporters boast of surging confidence readings and stock market gains as evidence of his positive impact on the US economy. Worryingly however, the gap between the hard data and the buoyant mood of companies and consumers continues to grow. On the one hand the National Federation of Independent Business survey surged to its highest reading since 2004. On the other, the US has witnessed a marked slowdown in business lending growth and corporate investment. Additionally, the Atlanta Fed’s GDP indicator on Friday signalled annualised growth of just 0.5% for Q1, whilst the same morning the annual inflation estimates saw the first month-on-month decline in core consumer prices since 2010. This divergence between hard and soft data has been well documented, but at some point will need to realign.

What do the markets say?  The slope of the US Treasury Curve (2s/10s) having hit a post-Trump peak of 136 basis points in December, has flattened again to 103bps, close to pre-election levels. Similarly, the USD/JPY carry trade – a bellwether for global risk sentiment – has retreated below 109 and back to November ‘16 levels. The only market to remain convincingly above November 2016 levels is the equity market, which sooner or later will need something substantive on the data/policy side to re-establish the upward trend.

Behind all of this of course, are a series of stunning policy reversals from the President. Should we be surprised? The signs were there from the beginning with the reneging on his promise to jail ‘crooked Hillary’. Perhaps he can be cut some slack on that one. But the catalogue has continued to grow since then with complete reversals of his position on Nato, Syria, China as a currency manipulator (turns out they’re not), the US Export Import Bank and perhaps most significantly Janet Yellen’s position as head of the Fed.

You could argue that this is noise and that the real proof of the pudding will be in Trump’s ability to deliver on tax reform and de-regulation. The news on that front, however, is looking less encouraging by the day, as Treasury Secretary Mnuchin recently announced the initial “aggressive” timeline for tax has been pushed back. The inability to repeal the Affordable Healthcare Act has been blamed and may yet come back to haunt them.

Perhaps this politics stuff is not as easy as it looks. Though with the debt ceiling fast approaching, investors will be counting on Trump to pass a stop-gap measure in order to avoid a shut down on April 29th. So maybe it is no surprise after all that he has changed his tune on Yellen, who is likely to be far less hawkish than other favoured Republican candidates. Like his predecessors, he understands the virtues of lower interest rates.

Where will it end?

Reflecting on his litany of u-turns, we are left wondering: where will Trump draw the line? With his ideological chief strategist Steve Bannon increasingly being shunted to the sidelines, will Trump change his tune on protectionism and the environment? As the hard reality of political manoeuvring continues to hit home, so might the strong winds of globalisation and technological advancement prove difficult to circumnavigate.

The views above are published solely for information purposed and are not to be construed as a solicitation or an offer to buy or sell any securities, or related financial instruments. It does not constitute a personal recommendation as defined by the Financial Conduct Authority (“FCA”) or take into account the particular investment objectives, financial situations or needs of individual investors. The views above are based on public information and sources considered reliable.