Eat Drink and be Merry, for Tomorrow… – Rubrics – Asset Management

Eat Drink and be Merry, for Tomorrow... 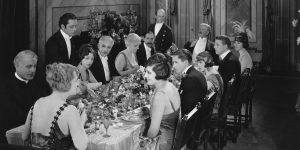 Unexpectedly bullish
2017 represented a remarkable year in many respects. Most notably for the complete absence of volatility. Stepping back 12 months, few would have foreseen such a bullish year for asset prices, particularly when considering the seismic nature of 2016.

At that point, looking ahead, the road seemed decidedly rocky. On the political front key elections in the Netherlands, Austria, France and Germany were set to confirm our worst fears that the Anti-Establishment movement had taken hold and was spreading its roots. Brexit and Trump were just the beginning. Meanwhile, central banks were to commence winding down the most radical monetary experiment in history. Not only were the Fed already 12 months into their hiking cycle but discussions on the reduction of the balance sheet were to begin in earnest. The ECB, although some way behind the Fed in respect of tightening, were to begin their own tapering programme of a balance sheet that had grown to some €5 trln since 2008. From a general economic perspective, by the beginning of 2016 we were already more than 7 years into the global recovery. Globally, growth had been robust, headline employment healthy and whilst the central banks had failed to hit their inflationary targets, the recovery in asset prices had been nothing short of stellar. The problem as we saw it was clear. A lack of productivity was holding back real wage growth and with it a more sustainable and broad-based recovery. Trump tax reform or not, there was only so much additional demand could be created within an already over-leveraged global economy. So with assets priced at extremely elevated levels, surely the market was rife for some kind of correction? 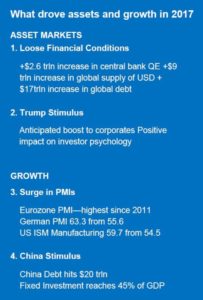 In fact 2017 was one of the least volatile periods in recent history. But how and why? Well upon reflection what transpired was an amalgamation of market friendly influences (see insert).

The impact on asset prices was pronounced. US equities[1], which avoided registering a negative month for the first time since 1958, enjoyed another excellent year whilst credit spreads in both investment grade and high yield ground tighter. Emerging market debt[2] enjoyed its strongest 12 months since 2012 whilst EM equities[3] were perhaps the biggest winner gaining the most in a year since 2009 (+34.4%). And this is before we’ve mentioned cryptocurrencies!

Why should we be wary?
On the surface all is right with the world, many might even say that markets are justified in their euphoria. When we look a little deeper though, each of the underlying issues raised above remain unresolved. Indeed a further 12 months of loose conditions may have even exacerbated the situation. The lack of a broad-based global recovery is more evident than ever with rising inequality painfully apparent throughout the developed world. This is unlikely to affect the markets in the near term, however it does play into the longer term narrative of growing political instability. Perhaps one of the biggest short-term risks is that central banks actually achieve some of that ‘real world’ inflation they’ve been craving. Why now you might ask, given that over 7 years and $20 trln of liquidity hasn’t managed to do the job? However with monetary policy still accommodative and the prospect of a late cycle fiscal push in the US don’t be surprised if we see an increase in inflation expectations. It may not need a significant increase either to shift rates higher from current levels and potentially spark some life back into credit and equity markets. 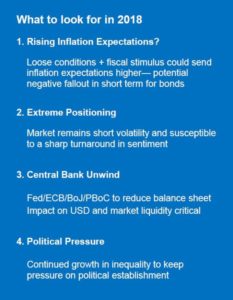 This leads us to our last point. The $20 trillion elephant in the room. With quantitative tightening having commenced in the US, the ECB and BoJ in tapering mode, what will this mean for financial conditions and volatility? It will depend on the scale and timing of course.

Talking about it is one thing, however the critical factor will be the $ value of any liquidity withdrawal. Throughout 2017 we saw broad based USD weakness which contributed to a $9 trln increase in global USD supply. A powerful lubricant for global financial conditions, especially for emerging markets. If in 2018 we were to see a reversal of this, a strengthening USD coupled perhaps with some disappointment in growth, the year ahead may just provide a little more excitement than many anticipated.

The views above are published solely for information purposed and are not to be construed as a solicitation or an offer to buy or sell any securities, or related financial instruments. It does not constitute a personal recommendation as defined by the Financial Conduct Authority (“FCA”) or take into account the particular investment objectives, financial situations or needs of individual investors. The views above are based on public information and sources considered reliable.